Island Barn Reservoir is a non-impounding reservoir which is retained by an earth filled embankment with puddle clay core approximately 10.8m high and 2700m long. The minimum crest width is 4.6m and the inner and outer slopes are 2.5 to 1, and 3 to 1 respectively.

Island Barn Reservoir was constructed in 1908 for the Metropolitan Water Board and opened in 1911. It stores water abstracted from the River Thames which is then fed into nearby sites to be treated and connected into the drinking water supply network. The reservoir covers an area of 122 acres which is about half the size of Hyde Park, and holds approximately 992 million gallons of water.

During April/May 2015, a Willowstick Survey of Island Barn Reservoir was carried out along the entire embankment length.

The survey identified one main seepage zone and two other zones of seepage.

Seepage through thin clay core dams is very serious as there is a risk of a piping failure in the dam due to internal erosion and ultimately failure of the embankment. This could have a catastrophic outcome downstream of the reservoir due to the urban setting.

As such, due to the serious nature of the identified leakage, the option to ‘Do Nothing’ was not acceptable.

As a result of the identified leakage, a review of tried and tested techniques to ‘seal’ leaks within an embankment were reviewed by Atkins and presented in an Options Report.

The options considered were:

The initial preferred remedial action was a Cement Bentonite Cut Off Wall. However, the major disadvantages of this solution were the extensive temporary works and widening of the existing embankment crest to accommodate the machinery working area together with overall cost.

Aware of the requirement to mitigate the impact of the works on the Island Barn Sailing Club who use the reservoir throughout the year for recreational sailing and events together with minimising temporary works/vehicle movements in the surrounding urban area; Sheet Piling (UK) Ltd proposed an innovative solution involving installing the sheet piles through the crest of the dam from a purposely designed and constructed floating barge manufactured from Unifloat Pontoons.

By utilising the benefits of a ‘Silent Vibrationless’ hydraulic pile press which could be floated across the reservoir on the purposely built pontoon, Sheet Piling (UK) Ltd were able to demonstrate numerous additional advantages of the proposed solution.

The permanent sheet piles for the cut off wall in the three identified areas of seepage were designed by Atkins and in total consisted of 385no 18.3m long Arcelor GU32 Sheet Piles as noted below:

The sheet piles were ordered from Arcelor Mittal via an ex-mill rolling from their dedicated sheet pile mill in Belval, in Luxembourg.

In order to reduce further the permeability of the completed sheet pile cut off wall, the sheet piles were supplied with Wadit Clutch Sealant.

The installation works commenced in July 2017 with the installation of the temporary jetty to provide a structure from which the pontoon barge could be assembled and providing a transition from land to water based activities for the works.

The temporary jetty was installed using a Giken Pile Pressing method to mitigate any potential for liquefaction of the granular reservoir embankment shoulders due to vibratory considerations.

The pontoon barge was then assembled using 25no Volker Brooks Unifloats, and an 80Te Weldex Crawler Crane was loaded onto the barge followed by ancillary piling equipment. All the above works were undertaken in strict accordance with Royal Haskoning barge layout and stability calculations.

Once moved into position using the workboat the Giken Pile Press was lifting into location on a specially prepared platform over the centreline of the puddle clay core and installation of the 18.3m long sheet piles commenced.

The only plant located on the reservoir embankment was a Giken Pile Press and Power Pack together with 2no piling operatives. All remaining equipment was located on the barge thus avoiding excess temporary works to the embankment which would have otherwise have been required.

One concern raised by Qualified Civil Engineer (QCE) Reservoir Panel Engineer and Atkins Principal Dam Engineer was in respect of the use of water during pile installation and the effect this would have on the puddle clay core.

To mitigate the concern, Sheet Piling (UK) Ltd in conjunction with CABV JV produced an Installation Procedure Flow Chart which contained hold points necessary for all key members of the project.

On site, the sheet piles were actually installed without the requirement of any water jetting to the design pile toe level/cut off level within the London Clay much to the satisfaction of the Design Team.

The main sheet pile cut off wall installation works commenced in August 2017 and were completed over a 12no week period. 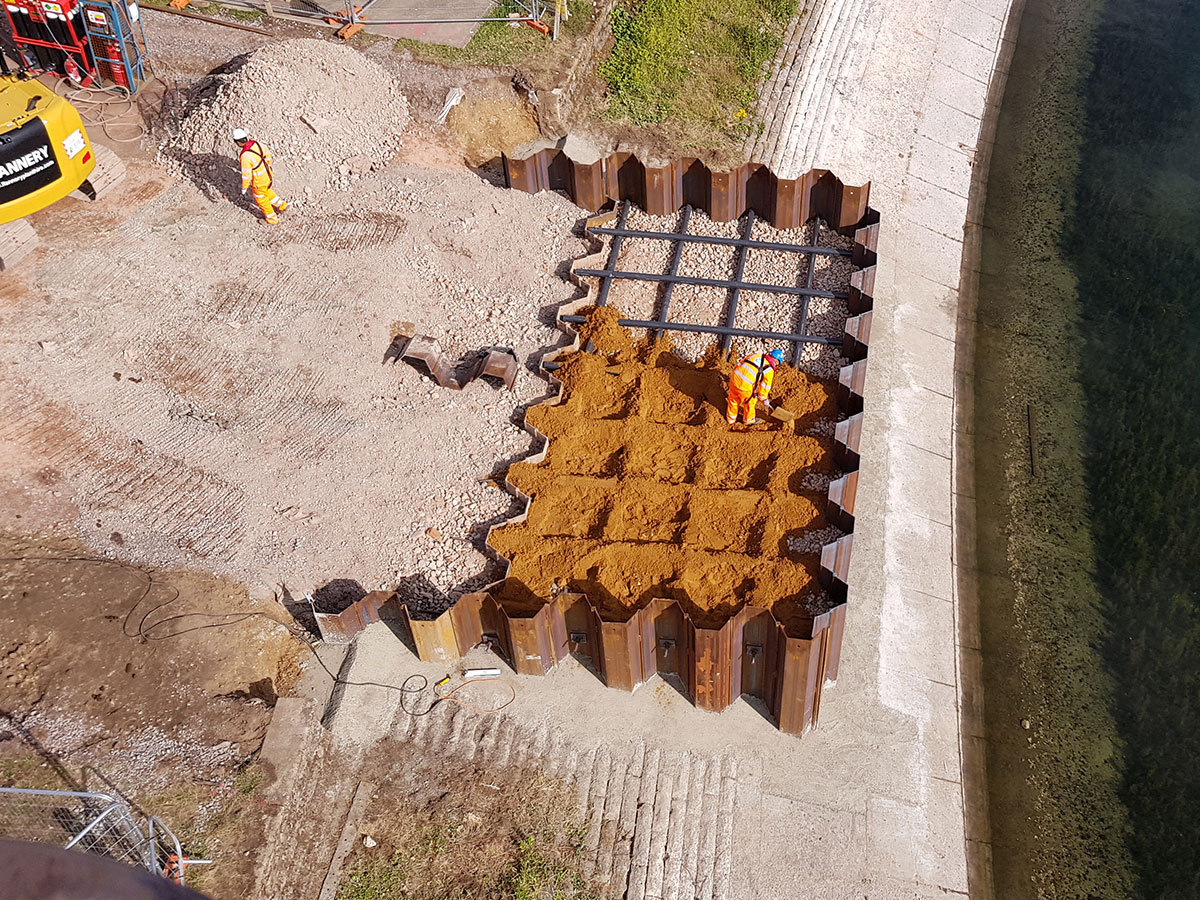 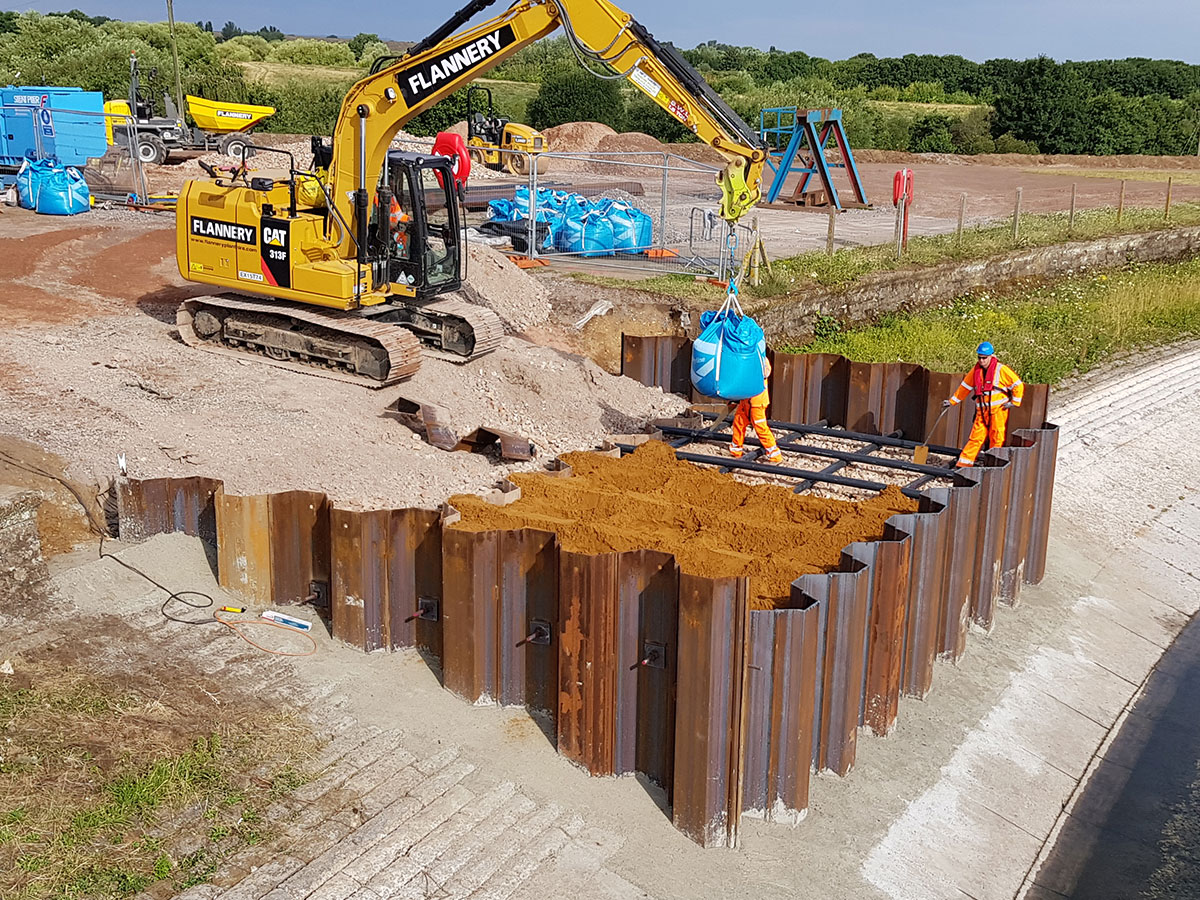 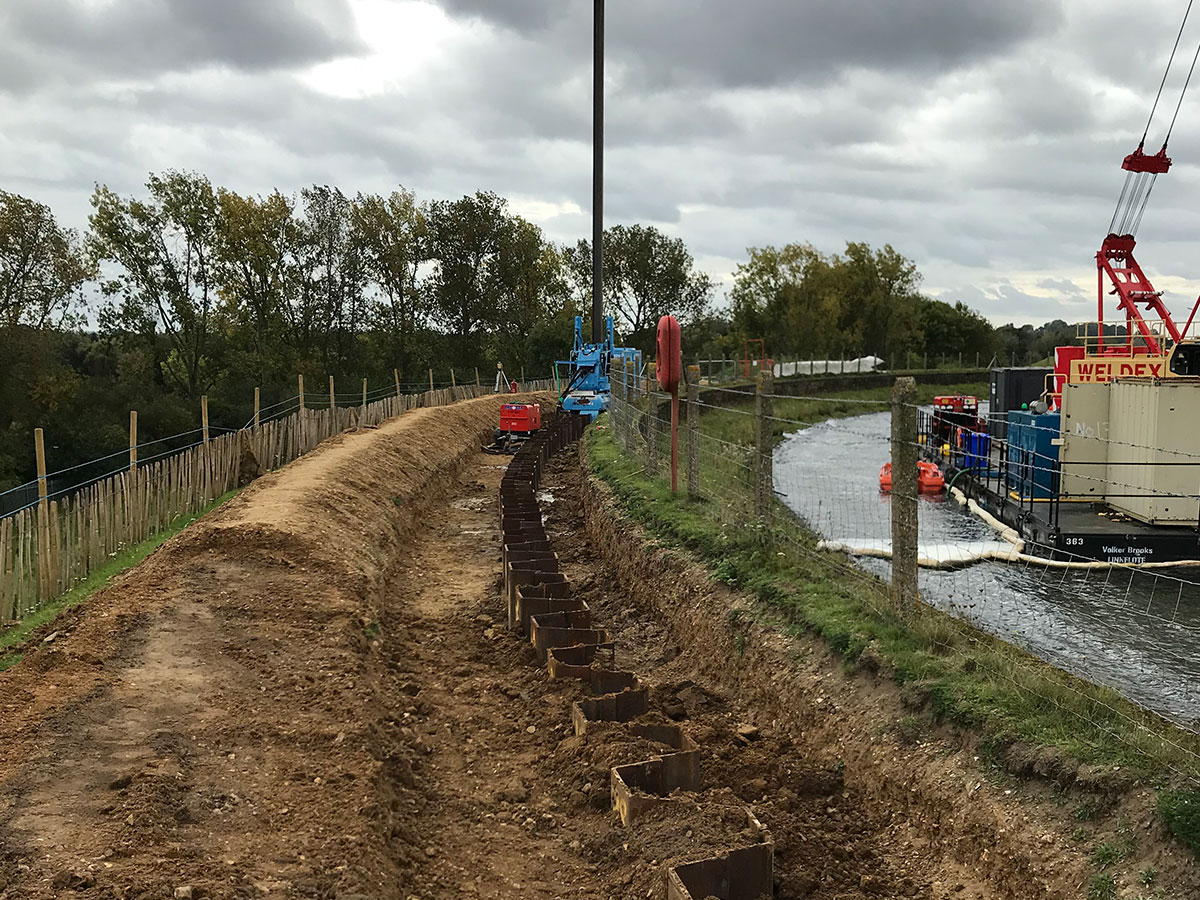 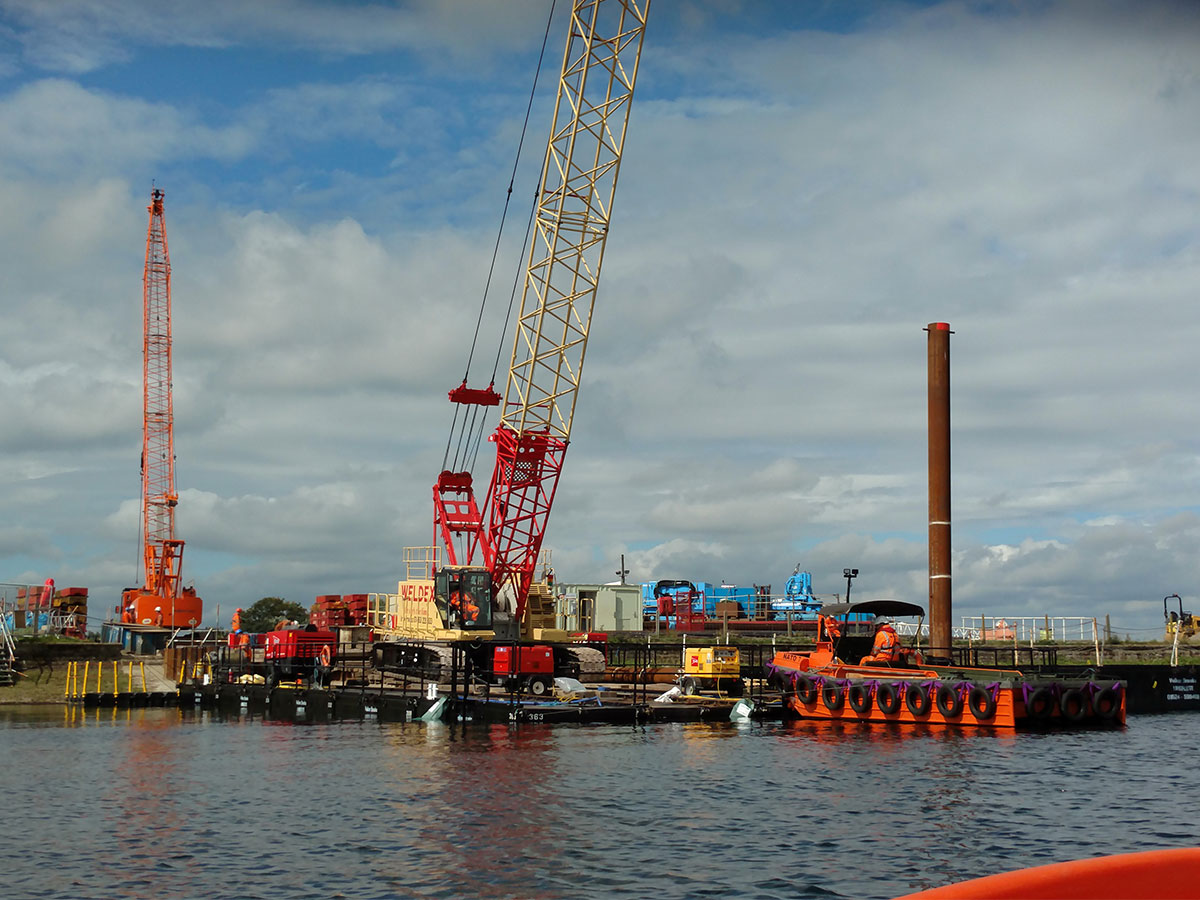 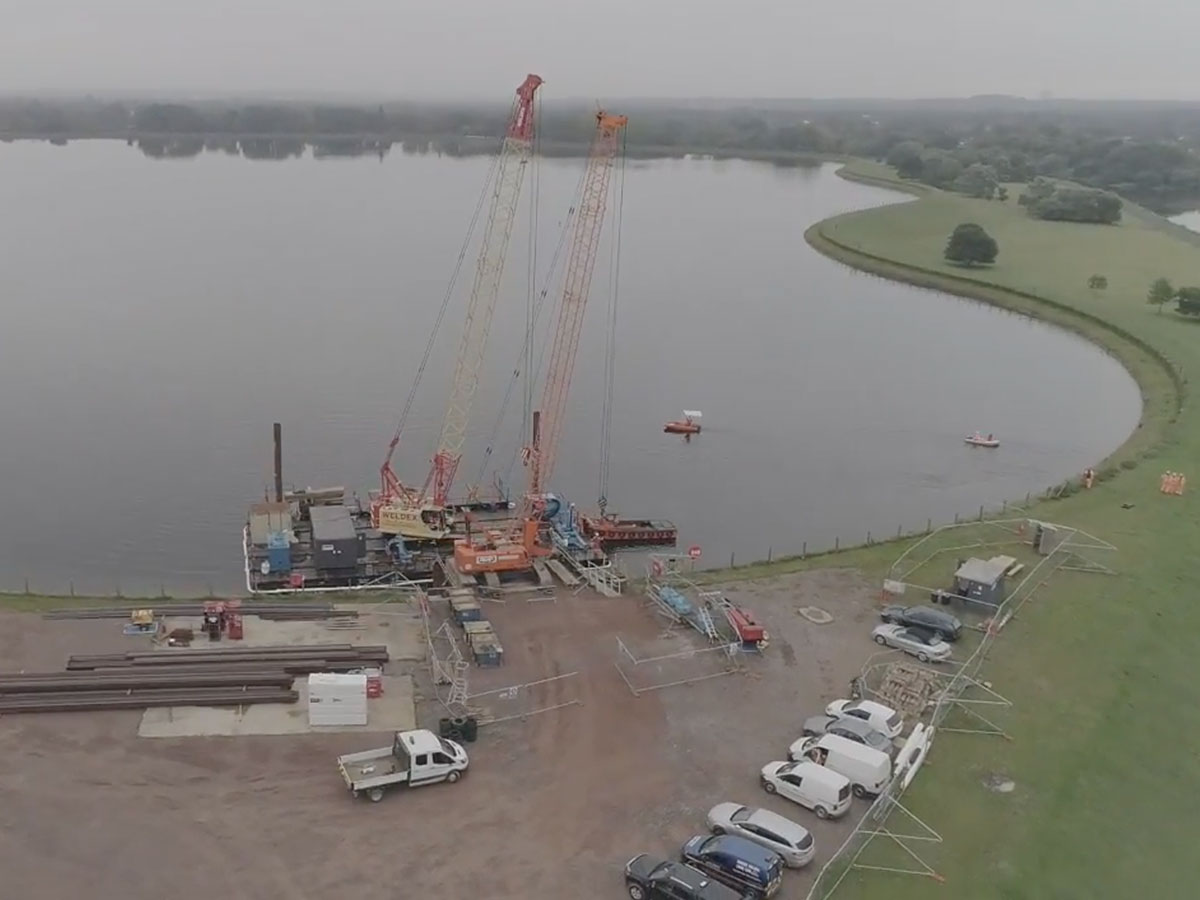 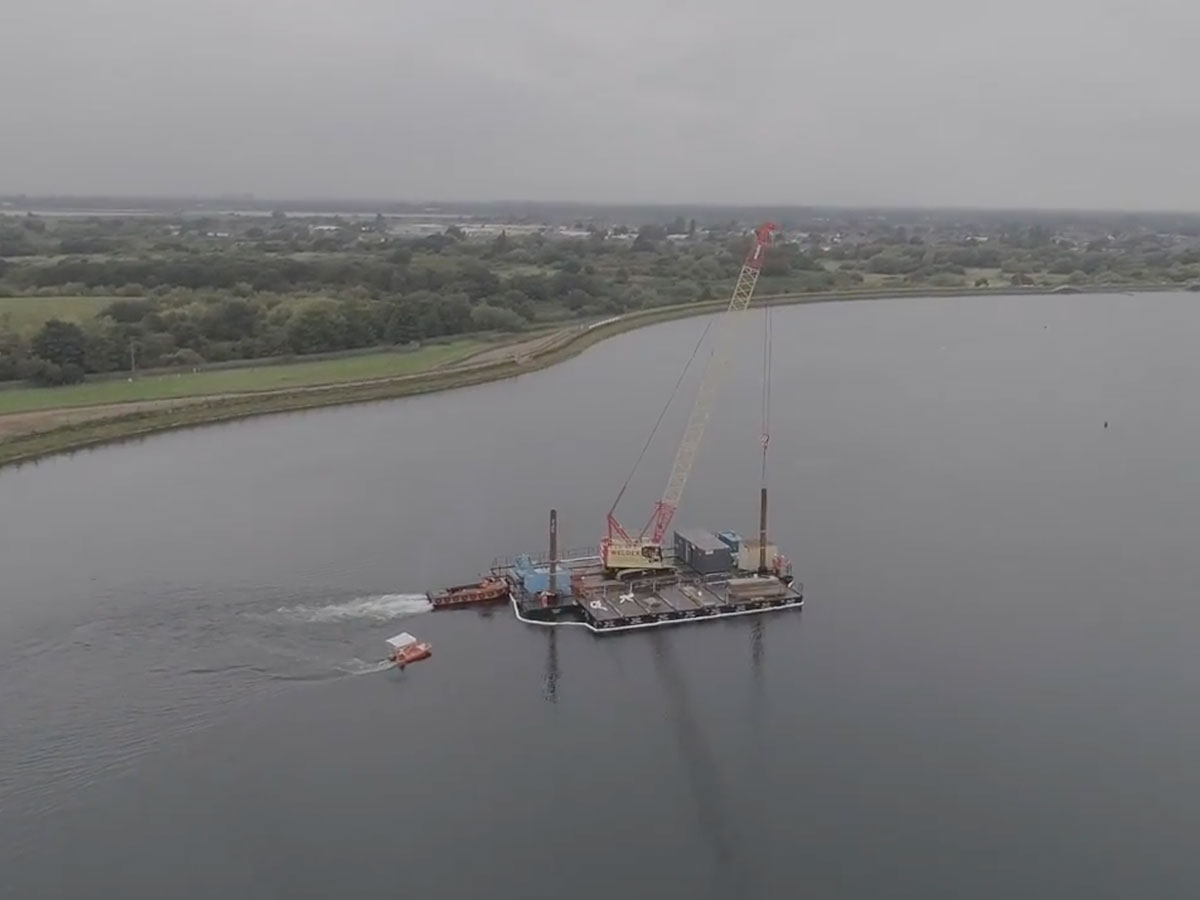